Skip to main content
It looks like you're using Internet Explorer 11 or older. This website works best with modern browsers such as the latest versions of Chrome, Firefox, Safari, and Edge. If you continue with this browser, you may see unexpected results.

How to Borrow Something

Clicking on an item's title or cover takes you to its record in the library catalog. From there you can sign in, then place a request to pick it up (or for distance students, have it sent to you).

Digital resources (like ebooks) don't need to be checked out, but may have limits on how many people can view at once. If you're having trouble accessing something (or just have a question), chat with us or email libraryhelp@pacificu.edu.

"Museum at (Our Place): This IS Kalapuyan Land" is a yard sign exhibition featuring contemporary Native American artwork from an exhibition curated by Steph Littlebird Fogel at Washington County, Oregon's Five Oaks Museum.

Click on the artist names above to see and learn more about works now on display around Pacific's Forest Grove campus.

More resources from the exhibition:

Meet Steph Little Fogel and learn more in the video below (originally made for kids visiting the exhibit, but fun for everyone!):

DeAnna Bear (Eastern Band Lenape) speaks about pride and truths of Native community in her work.

The beadwork by Jana Schmieding (Cheyenne River Lakota Sioux) shows how threads of family, tradition, meditative practice, Native pride, and visibility are all interwoven in her artwork.

Phillip Thomas (Chickasaw) inspires storytelling through his vibrant and dreamlike paintings that mix imagery from many origins.

Nestucca (Grand Ronde) paints contemplative works where figures appear in a haze that leaves their emotions and environment up to the viewer to fill in. This painting honors Missing and Murdered Indigenous Women, an ongoing epidemic propelled by extractive oil "man camps" and lack of recognition by U.S. law enforcement.

Carol Haskins (Grand Ronde) beads intricate animal motifs and cultural symbols into her work as a master beadworker and teacher.

Through his work, Greg A. Robinson (Chinook) revives, teaches, and shares ancient Chinookan style art with people across the region.

Derrick Lawvor (Modoc) transforms a classic “Western” object into an genrebending sculpture; is it a summer fruit, a PNW staple fish, or an otherworldly device?

Don Bailey overlays references to other artists, history, iconography, and pop culture in his paintings that shake up (Native) fine art. Don also has a long teaching history at Chemawa Boarding schools all over the U.S. forced youth to assimilate and violently removed Native culture - Chemawa is unique in having reclaimed the school and its mission to empower and protect Native youth today. [Learn more about Chemewa's roots as the Forest Grove Indian Industrial Training School in the "Local History" section of this guide below.]

The Kalapuyans originally occupied over a million acres in the Willamette and the Umpqua valleys. They have lived here for over 14,000 years and have endured enormous changes to their traditional life-ways during the past 200 years... The Kalapuyan tribes were about nineteen tribes and bands in three distinct areas, organized linguistically north, central, and south. They occupied the majority of the Willamette Valley with villages scattered along the rivers and streams of the valley... Today, the Kalapuyan descendants are important historical figures in the restoration of the tribe and leaders and contributors in the success of the Confederated Tribes of the Grand Ronde Community of Oregon. 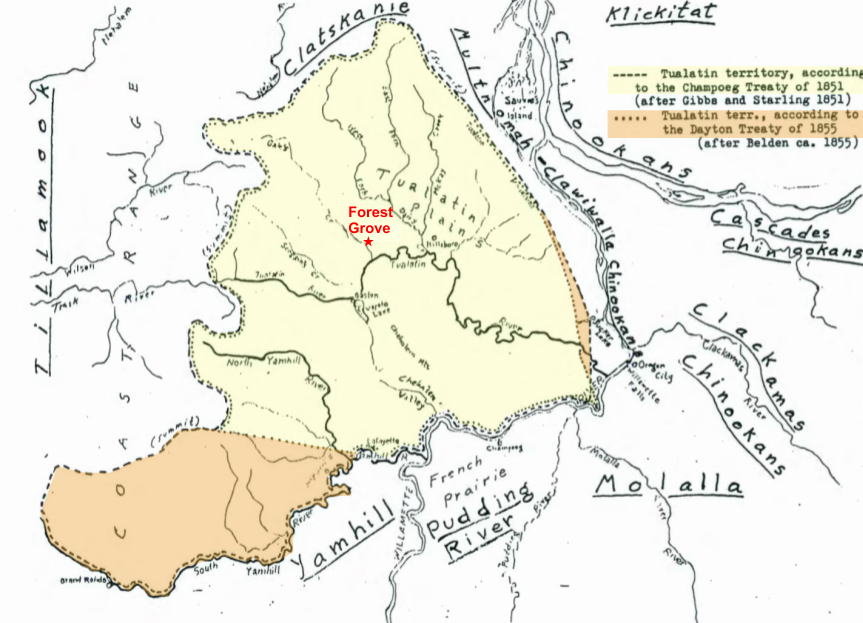 The Tualatins spoke the northernmost dialect of the Kalapuyan languages. Other Kalapuyan-speakers lived throughout the Willamette Valley. This is why they are often called Tualatin Kalapuyas: because they were one branch of the Kalapuyan tribes. In their own language, they called themselves Atfalati. The stress falls on the second syllable: ah-TFAL-uh-tee. The name Tualatin, which is preferred in daily usage by Kalapuyan descendants at Grand Ronde, may have come into English secondhand via Natives from another tribe. In its earliest versions, it was often spelled Twality or Twallatty, revealing its closer link to the original pronunciation. The last known fluent speaker of Tualatin, Louis Kenoyer, died in 1937.

Click here to visit our guide to the Indigenous History of Oregon.

Look for the link to the Forest Grove Indian School at the top of this section to learn how the U.S. government (with help from Pacific University) forced Indigenous peoples from other areas to assimilate into white society.

Acknowledging a Problematic Past 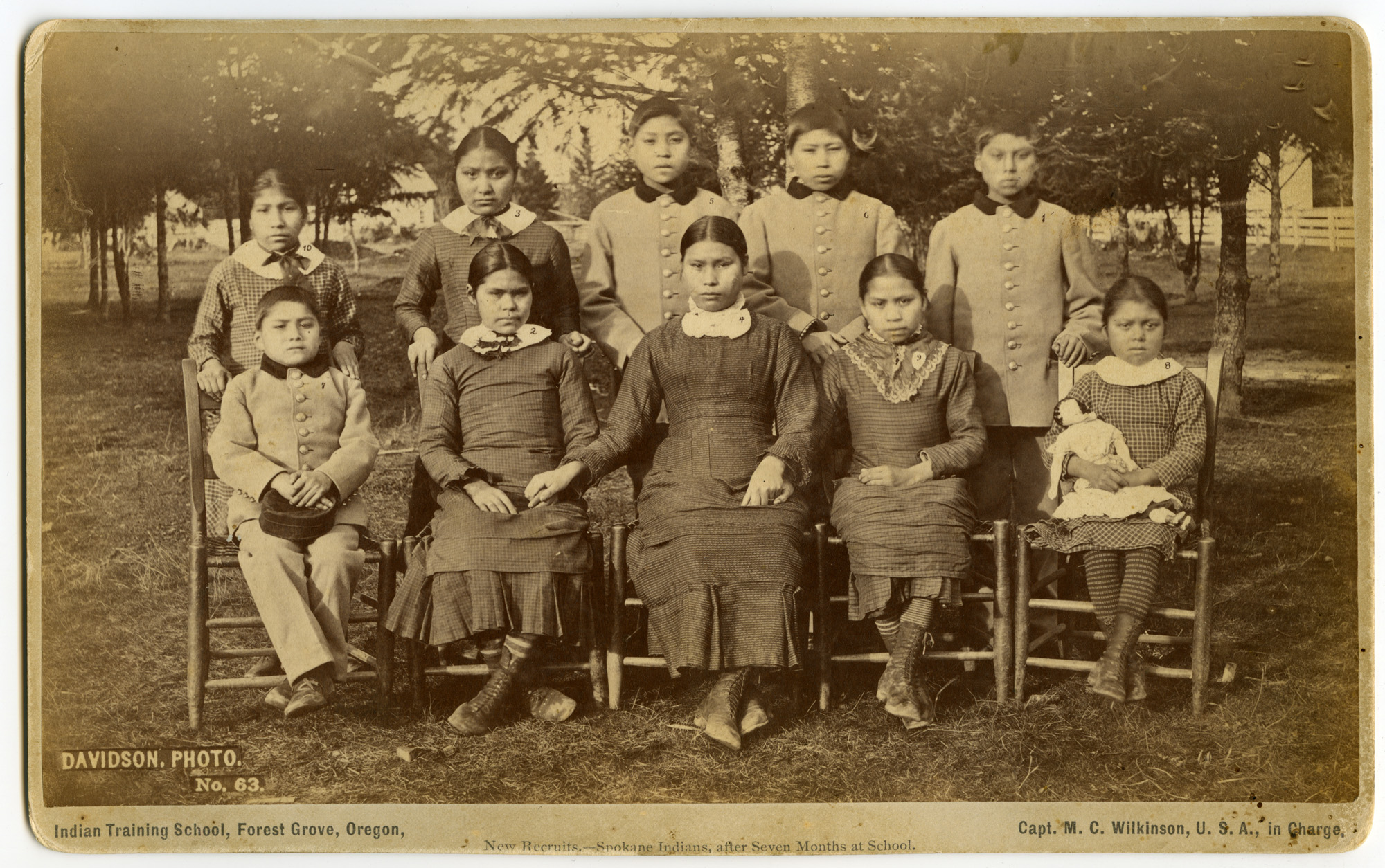 Between 1880 and 1885, more than 300 Native American children from two dozen Pacific Northwest tribes were taken to the Forest Grove Indian Industrial Training School.

Located four blocks west of Pacific University and run by the U.S. Department of the Interior (with support from Pacific), the school was part of a broader effort to assimilate Indigenous peoples into white culture and stamp out tribal political power.

While at school, students were expected to assimilate into the culture of the white settlers. They were forced to use English names, wear uniforms, cut their hair, attend church and learn manual trades such as shoemaking or sewing. They were punished for speaking their own languages or openly practicing Native beliefs.

In 1885 the school relocated near Salem and later changed its name to the Chemawa Indian School, which still exists today. In stark difference to its beginnings, Chemewa now encourages Native students to study their ancestral histories, languages and cultures.

Click here for more information about Native American boarding schools in our guide to the Indigenous History of Oregon.

Zoom in on Forest Grove in the map to find the original site of the Indian Training School.

(This list of landmarks is extremely abbreviated and open to suggestion for updates.) 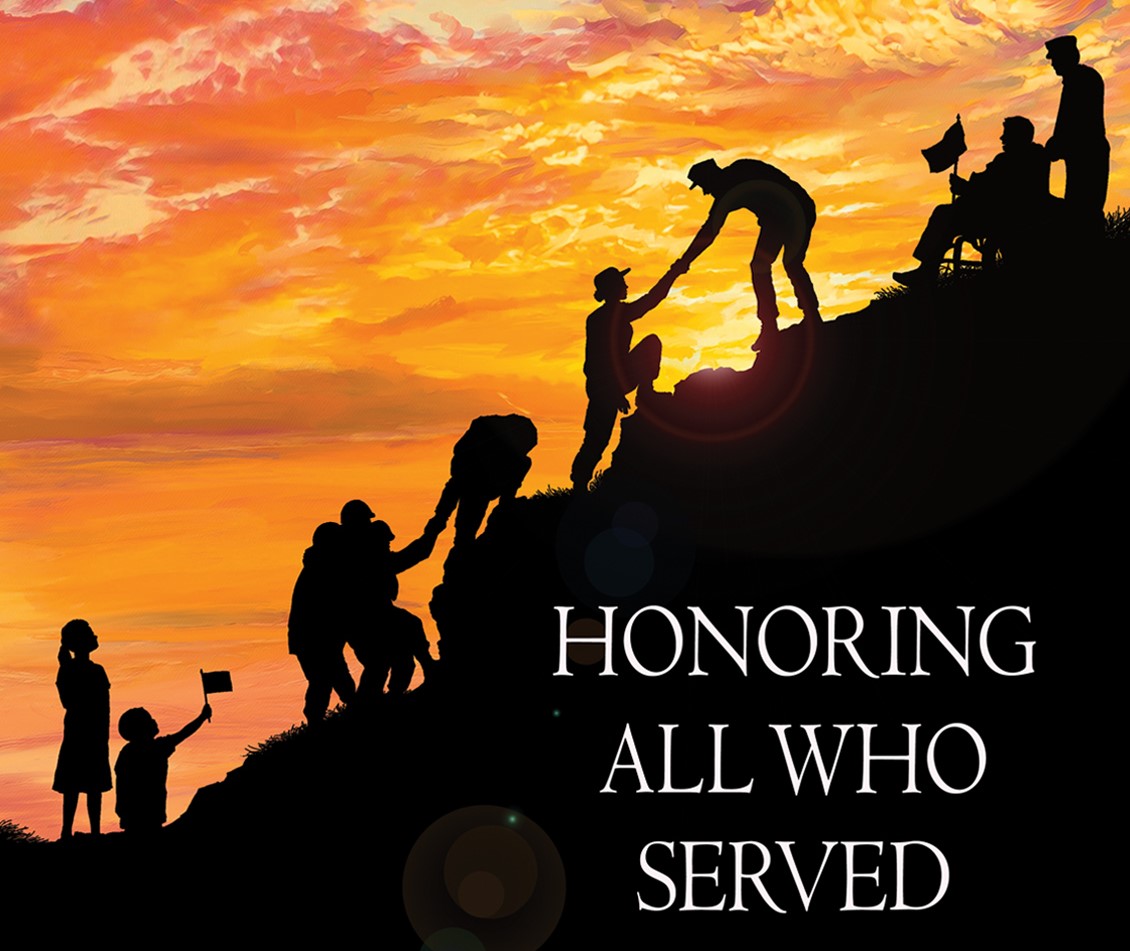 A celebration to honor America's veterans for their patriotism, love of country, and willingness to serve and sacrifice for the common good.

Click here for information on veterans support from Pacific University.

Books on Health & Social Issues for Veterans and Healthcare Providers

What are we missing? Use the form below to suggest new titles for our collections.