Skip to Main Content
It looks like you're using Internet Explorer 11 or older. This website works best with modern browsers such as the latest versions of Chrome, Firefox, Safari, and Edge. If you continue with this browser, you may see unexpected results.

A guide for learning about the histories of the Native peoples of Oregon, especially the Tualatin Kalapuya (Atfalati) tribe on whose land the Forest Grove & Hillsboro campuses of Pacific University stand. 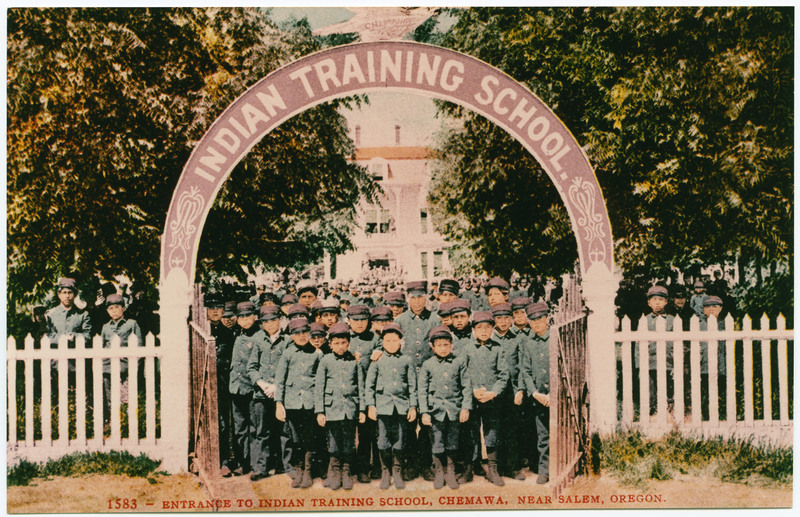 There is a long history of governments forcing the children of indigenous people to attend assimilationist schools. The Forest Grove Indian School (1880-5), which was administered by the federal government with support from Pacific University, was one example. Native Students who were taken to federal boarding schools were not allowed to practice their cultures or speak their own languages, and were often separated from their families for 3-10 years or longer. Boarding schools caused multi-generational trauma to many Native families. 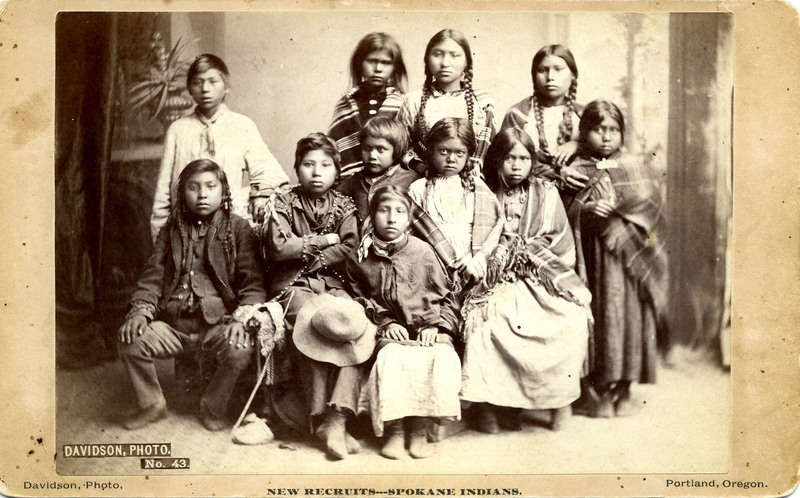 The Forest Grove Indian School was the second federal off-reservation boarding school in the United States. From 1880-5, it enrolled 310 students from over two dozen tribes in the Pacific Northwest. In 1885, it moved to Salem where it was renamed Chemawa Indian School. The Pacific University Archives hosts a web site with scans of photographs and documentary evidence on the school, as well as a bibliography and research tools for further investigations:

Boarding schools for indigenous peoples existed not only in the United States, but also in Canada, Australia and other colonial nations. There is a large and growing body of scholarship on the history of these schools. The sources below, which focus on the United States, provide starting points for learning about the history of these schools and their impacts on Native communities.

Our Spirits Don't Speak English: Indian Boarding School. (Video)
An excerpt featuring survivor Andrew Windyboy (Chippewa Cree), who attended boarding schools in South Dakota in the 1960s-70s. He speaks about the abuse he endured in the schools and the continuing trauma it caused. (The full documentary is only available with a subscription.)

Boarding School Healing (Video)
A short video featuring boarding school survivors and their descendants, produced by the Native American Rights Fund. The speakers talk about the impact that the system had on their communities.

Education for extinction: American Indians and the boarding school experience, 1875-1928.
Adams, David Wallace. 1995. Lawrence, Kan: Univ. Press of Kansas, 1995. Catalog record | This is often considered the canonical work on the history of Native American boarding schools in the United States. It provides a broad historical overview of how they came to be, with a special focus on the creation of the first federal off-reservation boarding school, the Carlisle Indian School.

A final promise: The campaign to assimilate the Indians, 1880-1920.
​Hoxie, Frederick E. University of Nebraska Press, 1984. Catalog record | This was one of the books to attempt describing the overiall history of the boarding school system in America. It was influential in shaping the conversation about the history of forced assimilation of indigenous peoples.

"Looking at discipline, looking at labour: photographic representations of Indian boarding schools."
​Margolis, Eric. In Visual Studies 19, no. 1 (2004): 72-96. https://visualethnography.me/wp-content/uploads/2018/05/Looking-at-Discipline-Looking-at-Labor.pdf  | An article that examines how/why photographs of Native American boarding school students were produced, with a special emphasis on the Carlisle Indian School.

This benevolent experiment: Indigenous boarding schools, genocide, and redress in Canada and the United States.
​Woolford, Andrew. U of Nebraska Press, 2015. Catalog record | A recent comparative history of the boarding school systems in the U.S. and Canada.

Other Native Boarding Schools in Oregon The Forest Grove Indian School and its successor, Chemawa Indian School, were off-reservation boarding schools run by the federal government. There were however many more schools for Natives in Oregon with similar aims, many of them run by either by the government or by missionaries on reservations.

Grand Ronde Agency Schools
A school (which was day-only in the beginning, then later a boarding school) functioned on the Grand Ronde Agency beginning in the 1860s or 1870s. For much of its existence, it was run in cooperation with the Catholic Church. An excellent source on the school is in the words of one of its earliest students: Louis Kenoyer, My Life (OSU Press, 2017).

Indian Manual Labor Training School (associated with Willamette University), Salem
Missionary Jason Lee founded this school in 1834 as part of a mission to Oregon Natives from the Willamette Valley (principally Kalapuyans). Initially built near the current location of Chemawa Indian School, it moved to a new building in Salem in 1841. The mission was dissolved in 1844 and the building turned over to the Oregon Institute, which later became Willamette University. See Oregon Encylopedia & Willamette's History Page

Klamath Agency Schools
There were two boarding schools on the Klamath Reservation: one at Agency headquarters and one at Yalnax. Little has been published on the Klamath schools to date.

Warm Springs Agency Schools
Two on-reservation boarding schools operated beginning in the 1870s: one at Agency Headquarters and one at Simnasho. They were run in cooperation with Presbyterian Missions. See: Oregon History Project, Warm Springs Agency Boarding School. The Pacific University Archives also holds the papers of one of its schoolmasters; see the Cyrus Walker Papers.